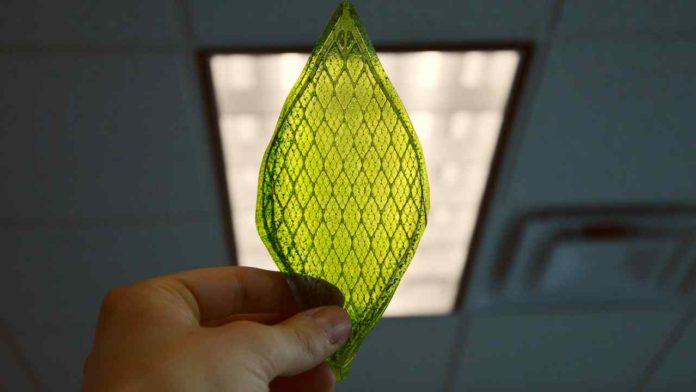 An Ontario researcher says he has discovered a new and inexpensive way to convert carbon dioxide into liquid fuel using sunlight. We have made plenty of progress with just sustainable energy in recent years, but there’s still a lot of work left to do. Now, there’s encouraging news on the development of an ‘artificial leaf’ that could lead to the production of truly ‘clean’ synthetic fuel.

In this case, the key step towards that achievement is the sustainable production of syngas (or synthesis gas), a mixture of hydrogen and carbon monoxide.

University of Waterloo engineering professor Yimin Wu says the process mimics photosynthesis, which is why he’s dubbed it “artificial leaf.” He says the discovery could have many applications and help in the fight against global warming.

Carbon dioxide conversion has long held the potential to reduce greenhouse gases that contribute to climate change. Wu says the oil, steel, and automotive companies could use the technology to reduce their carbon dioxide emissions.

The leaf mimics the photosynthesis we see in plants, combining incoming light, water, and carbon dioxide with a cobalt catalyst called perovskite. On the other end you get hydrogen and carbon monoxide, which can then make syngas.

While the efficiency of the machine is low at the moment, it should be possible to improve that with further research. It’s the unique combination of materials and catalysts, the scientists say, which puts their system ahead of similar devices.

“You are not limited to using this technology just in warm countries, or only operating the process during the summer months,” says chemist Virgil Andrei from the University of Cambridge.

That is, of course, important in those parts of the world where stable electricity or a reliable sunshine supply isn’t always guaranteed.

And while renewable power sources like wind and solar are becoming better and better at producing electricity for us, the energy demands of the world go way beyond electricity – heavy transport, shipping, and air travel all need cleaner fuels, which is where this artificial leaf could come in.

In terms of this new research, the team members say they are confident in their catalysts and combination of materials, and that bodes well for the future – eventually, syngas might not be needed as an intermediate stage, and the production could proceed straight to carbon-neutral liquid fuel.