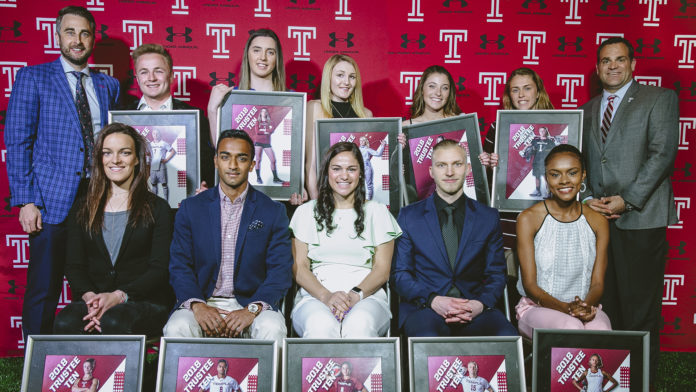 The American Athletic Conference declared weekly honors on Monday. Five Temple student-athletes were acknowledged by the Conference for their performances in the week halting Sept. 16.

Temple football junior cornerback Harrison Hand was appointed the Defensive Player of the Week. Hand listed 10 tackles, a team-high, and one interception in the Owls’ 20-17 gain in a game with the University of Maryland on Sept. 14.

“It’s a godsend blessing that I was recognized,” Hand said after exercise on Tuesday. “But it goes to my D-line and the linebackers. The whole defense is doing their job.”

Redshirt-sophomore wide receiver Jadan Blue and senior forward Lukas Fernandes, of men’s soccer, were titled to the AAC Honor Roll as one of the top five athletes in their sport, which too happens in the same week as well.

Blue had 5 receptions for 132 yards, incorporating a momentum-shifting 79-yard touchdown catch in the third quarter to put Temple up 13-9 in opposition to Maryland. Blue had steered the team in receiving yards.

Fernandes obtained his weekly honor for scoring 2 goals — understood in soccer as a “brace” — for a whole of four points on Sept. 13 against Lafayette University. Fernandes’ four points wrapped his career-high total for a single game, and his eight shots were a team-high for the contest. Fernandes earned five shots on goal in the Owls’ 1-0 win against the University of Delaware on Tuesday.

Fernandes and the men’s soccer team will be in litigation against Penn at Rhodes Field at 7 p.m. on Saturday.

Volleyball and women’s soccer players were also honored this week.

Temple volleyball sophomore setter Tyler Lindgren was titled to the Honor Roll after winning a victory as well as the name of Most Valuable Player at the Cherry and White Challenge on Sept. 14-15.