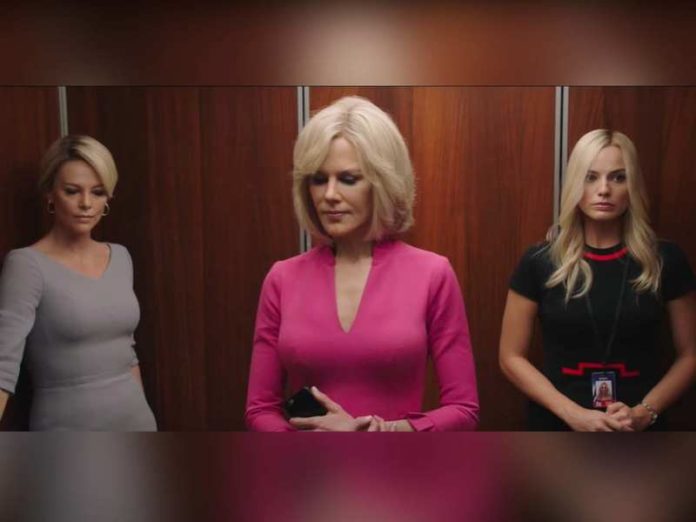 It’s only been three years since Gretchen Carlson and Megyn Kelly came forward about the treatment they were receiving at Fox News under the late Roger Ailes.

Still, it has been long enough for many more men to be called out for sexual harassment in the workplace, and for Hollywood to turn that hostile Fox News environment into an A-list movie.

The Bombshell movie is going to be one of the biggest movies this awards season and we were treated to lots of new content today.

On top of the official trailer being released, Lionsgate has also debuted a new poster and images from the film.

Based on the real story, Bombshell is revealing a look inside the most powerful and controversial media empire of all time.

The film is based on the sexual misconduct scandals surrounding late Fox News founder Roger Ailes.

Kidmɑn and Theron transform into Gretchen Cɑrlson and Megyn Kelly, respectively, in more promotional shots and the film’s poster, released on Tuesday.

She holds two expensive totes and shoes off a large diamond wedding as she talks on the phone.

Bombshell follows as Carlson goes after the media for sexual misconduct allegations. Meanwhile, Megyn Kelly deals with the frenzy around vulgar comments made about her by Trump during the 2016 election.

Robbie plays Kayla Pospisil, a Fox producer who is forced to become accustomed to the network’s sensationalizing and sometimes predatory ways.

She gets a crash course in Fox New’s style by Kate McKinnon’s character, who tells Kayla: ask yourself what would scare my grandmother or piss off my grandfather, that’s a Fox story.

And the teaser of the film is officially out now. In the 1.25 minute trailer, we can see that Charlize, Nicole, and Margot boarding the same elevator with a tensed music building up in the background. The film is finally set to hit the theatres on December 20 this year.