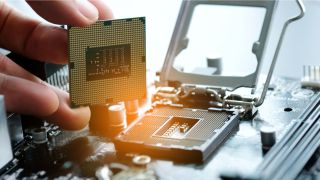 Advanced Micro Devices (AMD) and Intel (INTC) are the Apple and Samsung of the CPU industry. They are constantly at each other, trying to stay clear of the other.

AMD’s greatest competitor is Intel. Intel has been the market leader in the CPU (central processing unit) with close to 90% market share, a technology advantage, clear margins, and significant financial resources.

Due to its position in the market and special incentives, Intel has a huge say on its customers, almost like in a monopoly situation. The lack of competitive alternatives has allowed Intel to drive specifications, standards, benchmarks, and prices for its x86 CPUs.

However, AMD is slowly recovering market share from Intel in the x86 CPU market. And yet the latter still has well over an 80% share and AMD in the process has exposed itself to the competition from Intel. In its SEC filings, AMD cited numerous business risks that could impact its revenue and earnings growth potential. One such risk stated was an efficient product implementation.

Despite the advantage, Intel has slowed down its production range. It’s releasing fewer products this year while AMD is offering much more. Intel continues to showcase high profile CPU gimmicks. However many tech experts, reviewers, and professionals are hardly impressed. AMD has significantly jumped the charts in recent months.

Intel still has the cutting edge in the gaming industry but it will be foolish to not acknowledge AMD’s unreal growth. In fact, recently Troy Severson, sales development manager for PC gaming and virtual reality at Intel confirmed the same.

Intel still has the market. AMD is not quite there, yet. But they have come a bit longer way over the years. If they go the same distance in the coming years, Intel might actually be on the backfoot for the first time.